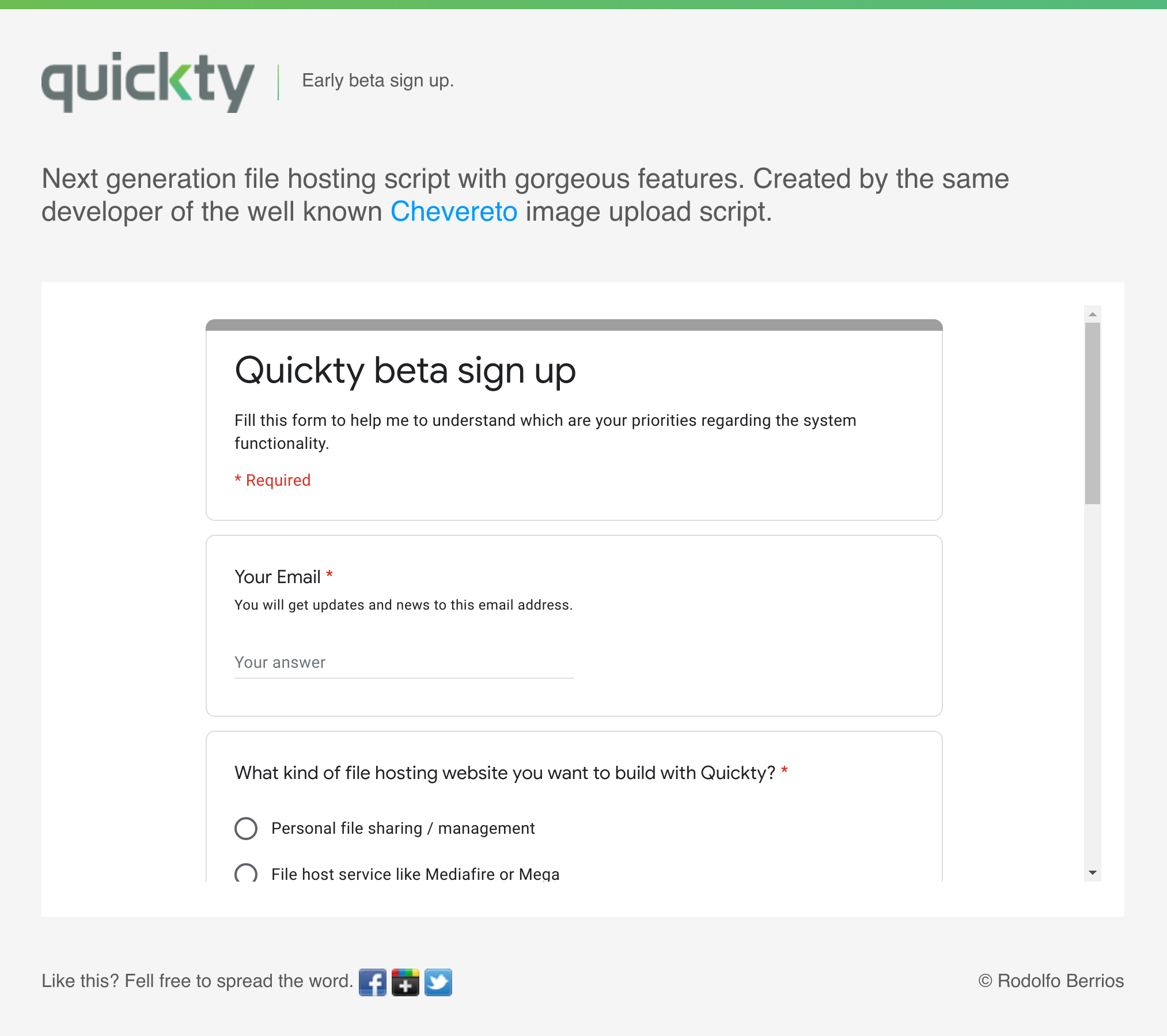 Years ago I started to think in a second product based on what I’ve learned with Chevereto and it has been like my own Duke Nukem in terms of countless delays to even start the development of the system. The delays are over and Quickty development has just started on mid-April 2015.

The prior delays are all about Chevereto which provides most core classes and libraries needed to build Quickty. Since I’ve estimated that Chevereto is already mature —in every measurable aspect— I think that is time to make Quickty a real thing.

Quickty has gain a lot of silent attention since I first announced it and I’ve been collecting these pre-signups all over. At this time I’ve near to 800 registered e-mail address for Quickty. For some 800 signups in more than 2 years could be small but take in consideration that this is without any kind of marketing and this is server side software, that number is huge in this business.

The signups also includes feedback regarding most wanted features and the key elements for each given need. Quickty feedback has been a priceless help for the development since it allows me to create something way more connected with the needs of those who will use and enjoy Quickty.

I’ve read every single comment sent in the signup form and for all those who have spent one minute of their time I have the deepest feeling of gratitude for be part of this. As a gratitude for this there will be a huge shout out and thank you that I will announce later.

There are a lot of challenges for Quickty if we take in consideration the big amount of good cloud services and self-hosted alternatives available right now. For me this means that Quickty shouldn’t be just your own Google Drive or Dropbox, it needs to be something inspired by those services but with its own unique features, just like Chevereto.

Modern file sharing could be summarized in file manager, cloud storage, synchronization and of course sharing. With all that in mind is easy to notice that almost all the services are the same but they are offered just in different flavors and policies. With that in mind, Quickty fits where those services doesn’t explore: customization and control.

The premise is to build Quickty a system with the same feel of Chevereto, which means high priority for the user experience with a modern look and extremely easy to use. The challenge here is to take the right features and functionalities into the final mix.

In terms of coding the challenge is to keep both systems active —Chevereto and Quickty— at the hight rate of development of Chevereto and for that I’ve spent a lot of time building the core classes for both projects. This allows me to add to Quickty all the goodies that Chevereto already have like the upload system or the external storage handling.

Quickty will feature an intuitive user interface, a modern file explorer, easy sharing options, support for file preview, user groups and promotions, alerts, account upgrades, external storage, CDN, etc. The list of features is really big but I tried to mention those that are most frequently requested. Apart from those explicit requested features, there will be a lot of stuff added at my own like support for contacts or the user theme editor.

The system will feature user generated themes which is some very interesting because it will allow anyone to easily create a theme directly in the user panel and share it with others. This has the potential to make Quickty a system with a huge collection of themes for the user panel which is something that I’m really looking forward. Also, Quickty will be released with several themes inspired by today most famous file sharing services, themes like «SingleDrive» or «COLOSSUS» —which reference OneDrive and MEGA— will be included by default among with several other themes with funny names like that.

The features will be spread in the similar way that I did with Chevereto 3 where I first started with the more crucial features and each month I added —and I keep adding— significative features for the system. This method allows a fast spread of releases and the feedback collected is tied more closely to each given introduced core task so it helps to keep focus on things so is easy to move forward.

At this time I’ve no release date yet for Quickty but development is going very solid and every time I work in Quickty I’ve the unstoppable need to use it ASAP so believe me that I’m working fast as I can to see this released within this year.

Pricing will be insanely cheap for a system like this mostly because I’m a one-man-army but also because I want people to enjoy this system. That’s why the personal edition will be totally free of charge with community based support. I don’t have pricing for the pro edition but is most likely that there will be a bundle with hosting + license hopefully with my long hosting sponsor Arvixe.

That’s all for now.